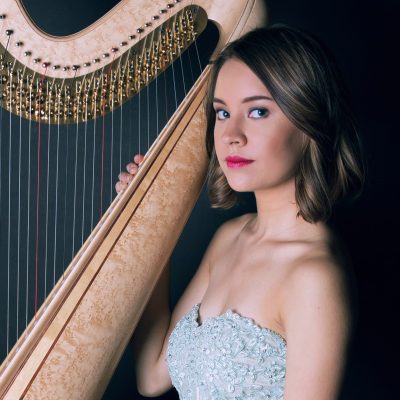 Praised by the New York Times as “excellent,” Katherine Siochi is an internationally acclaimed harp soloist and principal harp of the Kansas City Symphony. From 2017 to 2019, she served as principal harp of the Sarasota Orchestra. Siochi won the gold medal at the 10th USA International Harp Competition in 2016, one of the world’s most prestigious harp contests, and she is only the second American to win the prize since 1989. She has received numerous awards in national harp competitions as well, including first prize in the American Harp Society’s Advanced and Young Professional divisions. From 2015 to 2017, she was concert artist for the American Harp Society, presenting recitals and masterclasses in 23 U.S. cities. As an orchestral musician, she has appeared in Carnegie Hall, David Geffen Hall and Alice Tully Hall, and she substitutes frequently with the New York Philharmonic. As a soloist, she has performed extensively across the United States and in Hong Kong, China, and Israel. Siochi holds bachelor’s and master’s degrees in harp performance from the Juilliard School, where she studied with Nancy Allen. Read more about Katherine at www.katherinesiochi.com.