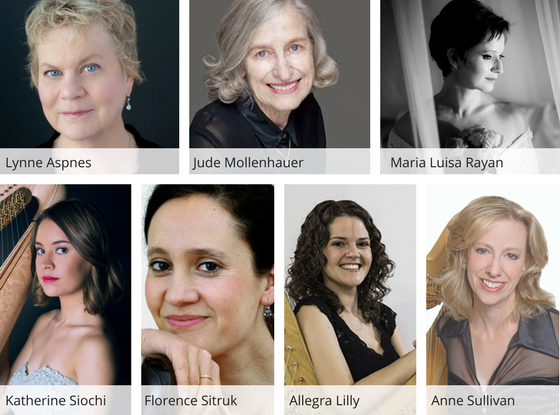 We are pleased to announce the members of our 2018 Young Artist’s Harp Competition jury. Are you a YAHS, Prep, or competition participant who would like a lesson with a jury member? Email info@harpseminar.com to inquire about lesson availability on July 7–8.

Lynne Aspnes is Professor Emeritus for the University of Michigan, Ann Arbor, School of Music, Theatre and Dance, and a former faculty member in the School of Music at Arizona State University, Tempe, Arizona. She is founder of the American Harp Center, in Petoskey Michigan. Read more

Jude Mollenhauer studied with Carlos Salzedo at the Curtis Institute of Music. She has been the principal harpist of The Columbus Symphony Orchestra since 1985, and she is on the faculties of Capital and Otterbein Universities. Read more

French-German harpist Florence Sitruk is the recently appointed professor of harp at Indiana University’s Jacobs School of Music, following the retirement of Susann McDonald. She continues to perform and is in demand as a soloist around the world. Read more

Allegra Lilly was appointed Principal Harpist of the St. Louis Symphony in 2013. She has also performed with the New York Philharmonic as well as the Boston, Chicago, Pittsburgh, Toronto, and Charlotte symphonies. Lilly is also harp instructor at the Brevard Music Center. Read more

Anne Sullivan is a graduate of the Curtis Institute of Music, where she also taught theory for 20 years. Currently she is the harp instructor at the University of Delaware and at Swarthmore College in Pennsylvania and runs the online learn Harp Mastery website. Read more