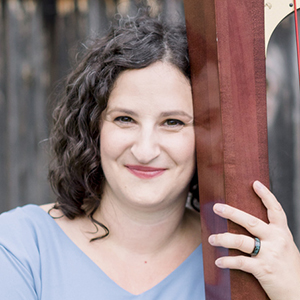 Canadian native Angela Schwarzkopf concertizes throughout North America as a soloist, chamber musician, and orchestral harpist and with many top chamber music, choral, and orchestral organizations. The first harpist to receive a Doctorate of Music in harp performance in Canada, she is now teaches at the University of Toronto, the Glenn Gould School, and at McMaster University. Outside of her university teaching, Angela maintains a thriving studio of private students in Toronto and is a newly appointed harp examiner with the Royal Conservatory College of Examiners. Angela is a Director at Large for the American Harp Society and a contributor to the international publications Harp Column and the American Harp Journal and serves on the editorial board of the latter. As an advocate for new music, she has worked on commissioning projects with many prominent composers. Most recently, Angela released her album, detach, of all new Canadian music.