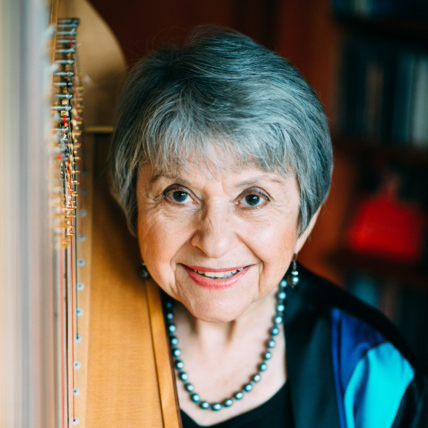 We are thrilled to welcome back Judy Loman as our YAHS 2021 Guest Artist. Recognized as one of the world’s foremost harp virtuosos, Judy Loman graduated from the Curtis Institute of Music, where she studied with the celebrated harpist, Carlos Salzedo. She became Principal Harpist with the Toronto Symphony in 1960.

As a soloist, Judy Loman has won the admiration of audiences and critics alike across Canada, the United States, Europe and Japan. The Toronto Symphony has featured her as soloist on several tours and she has appeared as guest artist with numerous other orchestras and ensembles worldwide. She has participated in many of North America’s music festivals and several of her performances have been filmed by Rhombus Media and aired on public television.

In addition to performances of traditional harp repertoire, Ms. Loman has commissioned several new works for her instrument by Canada’s foremost composers, including John Weinzweig, R. Murray Schafer, Glenn Buhr and Kelly Marie Murphy. She has introduced these compositions worldwide through her recordings and recitals in North America, Europe, Israel and Japan. Always seeking to add to the harp repertoire, she is active in transcribing classical and baroque works for the harp from the piano repertoire, as well as arranging folk and Christmas music for voice and harp.

Ms. Loman has been a featured recitalist at several American Harp Society Conferences and for the World Harp Congress. She gave the opening recital for the American Harp Society’s Millennium Conference in 2000. A highlight of this concert was the World Premiere of Kelly Marie Murphy’s “Illuminations”, commissioned for Ms. Loman by the Canada Council of the Arts. Her appearances with the World Harp Congress were in Paris, France, Tacoma, Washington, and Dublin, Ireland, where she performed R. Murray Schafer’s Harp Concerto, Glen Buhr’s Concerto for flute and harp, and Kelly Marie Murphy’s Harp Concerto, respectively.

In June of 2002 Ms. Loman retired from the Toronto Symphony Orchestra to devote her time to teaching, recording, concertizing and the publishing of her arrangements and transcriptions. To celebrate this new turn in her career the Toronto Symphony Orchestra and the Canadian Broadcasting Corporation commissioned a new work for harp and orchestra by the Canadian composer, Kelly-Marie Murphy which she premiered on June 12th. 2002. Ms. Loman recently received a grant from the Ontario Arts Council for a new piece for Flute, Viola and Harp Trio by Kelly-Marie Murphy. She performed the world premiere of this trio at her opening recital for The World Harp Congress held in Vancouver in 2011.

Judy Loman continues to teach, perform and record. For her 80th birthday she published a CD collection of all of R. Murray Schafer’s 7 works for harp. She is currently working towards completing a recording of all the pieces that she loves and hasn’t recorded as yet. She is a Fellow of the Royal Conservatory of Music and was honoured to become a Member of The Order of Canada in 2015.